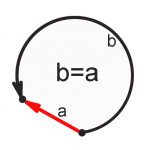 Sometimes interesting things can be discovered while working with routine trifles. It turns out that the metal plate vector is not necessarily rigidly tied to the boundaries of his body and under certain circumstances goes beyond it, becoming an auditory phantom.

The photo shows a part from the old volume control – stamped from a brass sheet spring, which ends 5 in contact with the site of the potentialiometer engine output, and the end of 1 touches the graphite track. (In the factory version, point 5 was on the back, as was point 4, the output was swirled 180 degrees later when all the parameters of the part became clear.) The spring is quite common except that its outer diameter is used for sliding contacts at once at two points 1 and 5, for which the spring has an incision at point 3.

At the end of the tests, it turned out that the cross-projection of the vector is directed from the bottom up. By bending the output 180 degrees (see pic) and thus getting contact at point 5 on the back of the part, I eventually got a connection from point 5 to point 1 with almost zero loss of clarity.

PS – For experiments used some very old potentiometer, he even had contact concerning the resistive track was not made of graphite or polished metal, as usual, but from a beam of the thinnest copper wire, rolled into the rim (see photo left). I only saw something similar as an antique engine brush from the Test Audiotrak. The contact had to be replaced with all-metal, because due to the different direction of the components it sounded sluggish.