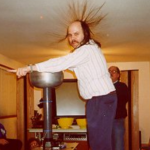 What is electricity? This question is impossible to answer because the word “Electricity” has several contradictory meanings. These different meanings are incompatible, and the contradictions confuse everyone. If you don’t understand electricity, you’re not alone.

Even teachers, engineers, and scientists have a hard time grasping the concept.

Obviously “electricity” cannot be several different things at the same time. Unfortunately we’ve defined the word Electricity in a crazy way. Because the word lacks one distinct meaning, we can never pin down the nature of electricity. In the end we’re forced to declare that there’s no such stuff as “electricity” at all! Here’s a quick example to illustrate the problem.

Do generators make electricity? To answer this question, consider the household light bulb. Inside a lamp cord the charges (the electrons) sit in one place and wiggle back and forth. That’s AC or alternating current. At the same time, the waves of electromagnetic field move rapidly forward. This wave-energy does not wiggle, instead it races along the wires as it flows from the distant generators and into the light bulb. OK, now ask yourself this: when “electricity” is flowing, is it called an Electric Current? Yes? If so, then “electricity” is simply the charges already inside the wires, where a flow of electricity is a flow of charge. And therefore we must say that the “electricity” sits inside the wires and vibrates back and forth. Generators do not create any, and electricity does not flow forward through the wires. Next, ask yourself if electricity is a form of energy. If it’s energy, then electricity is not the movable charges. Instead, electricity is made of invisible electromagnetic fields, and it doesn’t wiggle back and forth within the AC cables. Instead it can only exist in the space outside the wires, and not within the metal. Generators do create electricity, and it races along the wires at high speed. Yet please note that Electricity cannot do both, it cannot be both the charges and the fields, the electrons and the energy. So which one is really “the electricity?” Is it the wiggling electrons within the wires? Or is it the high-speed EM field energy? The experts unfortunately cannot agree on a narrow definition. The reference books give conflicting answers, so there *is* no answer.

If someone asks whether generators make electricity, it exposes a great flaw in the way we talk about “electricity”. If we can repair this flaw, perhaps our explanations will finally make sense.

Below are the five most common meanings of the word Electricity. Which one do you think is right? Think about this carefully, because if one of these meanings is correct, all the others must be wrong! After all, no “science term” must ever possess several conflicting definitions. Unfortunately our dictionaries and encyclopedias contain all of these contradictions. (Click the links to find out more about each.)

2. The everyday definition: “Electricity” means only one thing: the electromagnetic field energy sent out by batteries and generators.
Examples: PRICE OF ELECTRICITY. KILOWATT-HOURS OF ELECTRICITY.

3. The grade-school definition: “Electricity” means only one thing: it refers to the flow of electrons, the flowing motion of electric charge. When they stop flowing, the electricity disappears.
Examples: “CURRENT” ELECTRICITY. AMPERES OF ELECTRICITY.

4. “Electricity” means only one thing: it refers to the amount of imbalance between quantities of electrons and protons.
Example: “STATIC” ELECTRICITY. DISCHARGE OF ELECTRICITY.

ELECTRICITY, n.
The power that causes all natural phenomena not known to be caused by something else.
<grin!>
(Ambrose Bierce, The Devil’s Dictionary, 1911)

If we wish to agree on a single correct definition of “electricity,” which definition should we choose? The Scientific version, number one above? But that would mean that all of our books are wrong, since books insist that electricity is the energy, or that electricity is the motion of charges: the current. Except for the CRC Handbook and the NIST SI physics standards, the few textbooks which do use the scientific definition are all seventy years old, or older.

Well, maybe we don’t need to choose just one definition. Could we mix them? Could we let Electricity be an “elastic term?” Suppose we ignore all these contradictions and instead pretend that all of the above definitions are true. Below is the “clear” and “simple” description of electricity which results:

Does my description above sound stupid and impossible? You’re right. It is. The word “electricity” has contradictory meanings, and I’m trying to show what happens when we accept more than one meaning. Electricity is not both slow and fast at the same time. It is not both visible and invisible. And electricity isn’t the flowing motion …of electricity.

Instead, approximately ten separate things have the name “electricity.” There’s no single stuff called “electricity.” electricity does not exist. Franklin, Edison, Thompson, and millions of science teachers should’ve had a long talk with Mrs. McCave before they decided to give one single name to a large variety of independent science concepts.

Mrs. McCave was invented by Dr. Seuss. She had twenty three sons. She named them all “Dave.”

Whenever we ask “What Is Electricity,” that’s just like asking Mrs. McCave “who is dave?” How can she describe her son? There can be no answer since the question itself is wrong. It’s wrong to ask “who is Dave?” because we’re silently assuming that there’s only one Dave, when actually there are many different people. They all just happen to be named Dave. Who is Dave? Mrs. McCave cannot answer us until she first corrects our misunderstanding. Dave doesn’t exist. She wishes she’d given them all separate names.

For the same reason, we’ll never find a simple answer to the question “what is electricity?” because the question itself is wrong. First we must realize that “electricity” does not exist. There is no single thing named “electricity.” We must accept the fact that, while several different things do exist inside wires, people wrongly call all of them by a single name.

So never ask “what is electricity“. Instead, discard the word “electricity” and begin using the correct names for all the separate phenomena. Here are a few of them:

The above questions all have sensible answers. But if you ask what is electricity?, then all of the answers you’ll find will just confuse you, and you’ll never stop asking that question.

“I am reminded of the professor, who when asked the question ‘What is electricity?’ replied ‘It all depends what you mean by ‘is.'”
– A. Gilchrist, ASLIB 1972